How It Works
16563
page-template-default,page,page-id-16563,page-child,parent-pageid-15766,bridge-core-3.0.5,qode-page-transition-enabled,ajax_fade,page_not_loaded,,qode-child-theme-ver-1.0.0,qode-theme-ver-29.2,qode-theme-bridge,qode_header_in_grid,wpb-js-composer js-comp-ver-6.10.0,vc_responsive

Home > Products > How It Works

What is an optical distractor?

According to the US Government, non-lethal Optical Distractors (ocular interrupters or “laser dazzlers”) are visible (green) laser devices that have temporary optical effects on human targets.  These types of non-blinding laser devices use highly directional optical energy to support several non-lethal missions, including:

Although these mission capabilities are generic to any high-intensity light source, laser light sources, versus LEDs, are ideal for non-lethal applications, as the optical energy is collimated and very directional.  This allows the Operator to precisely deliver the laser energy at long ranges, while minimizing the total power output and minimizing collateral effects to other bystanders.

What is the intended use for the Dazer Laser®?

A Dazer Laser® allows the Operator to temporarily impair the vision of the target(s) by temporarily eliminating their ability to see, engage and/or effectively target the Operator by overwhelming their visual sense.  Due to the Operator’s ability to adjust the range of engagement from 1-2400 meters (model dependent), the Operator can visually impair, warn, assess, deter, suppress, illuminate, target, hail and warn, and/or communicate with the target(s) potentially avoiding an unnecessary escalation to more lethal engagements.

What is the difference between fixed focus and variable range and focus? 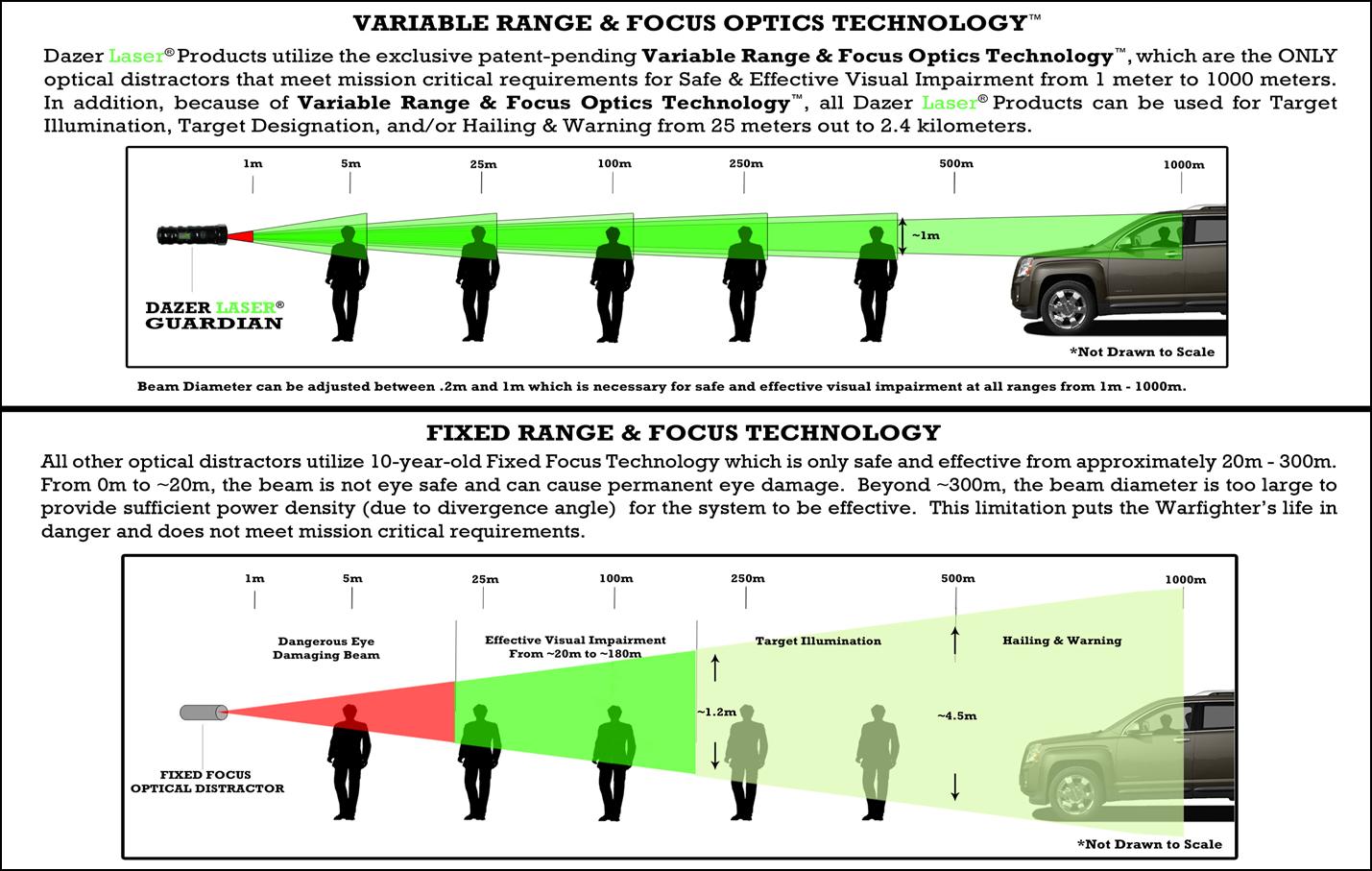 What does NOHD mean?

The patent pending MEAN Beam™ technology is incorporated into all Dazer Laser® Products.  MEAN Beam™ technology is a unique way of operating the GreenStar Laser in a simultaneously CW (continuous wave) and pulsed (modulated) lasing mode out of one laser.  This provides the Operator with a certain combination of CW and chirp modulated (6-16 Hz) lasing for different Day Time or Night Time operation.

Previously, Optical Distractors have functioned in either a CW (continuous wave) mode, Slow Pulse mode or Fast Pulse mode which has different effects on the target in daytime versus nighttime operations.  During the day, since the sun acts as the most powerful source of surrounding ambient light, the pupil of the human eye is smaller in diameter to help prevent too much light from entering the eye and potentially causing damage.  Since the pupil is smaller, the laser would operate in the CW only mode to apply more irradiance to the human eye while constricted in the day.   During the night (low-light), since there is a significantly less amount of ambient light available, the pupil of the human eye is much larger in diameter which allows more light to enter the eye to compensate for the lack of surrounding ambient light.  Being the pupil is larger and allows more light into the eye, these other Optical Distractors would operate in a pulsed mode.

Why the color green versus red or other colors?

Green Lasers are seen anywhere from 4x – 300x greater than Red, or any other colored, Lasers.

Who can buy Dazer Laser® Products?